This adorable t-shirt design features four of our Birdorable birds that are common in back yards across the United States and Canada. The birds that are perched together in this original cartoon design are:Â American Goldfinch, Northern Cardinal, American Robin and Black-capped Chickadee.

Cute Backyard Birds is available on many different t-shirt styles and colors for men, women and children. The shirt shown above is a Girls' Fine Jersey T-Shirt, a super-soft ribbed collar shirt made of 100% combed ringspun cotton.

These shirts will make a great gift for anyone that loves their backyard birds! Click through to Zazzle to customize and order yours today! 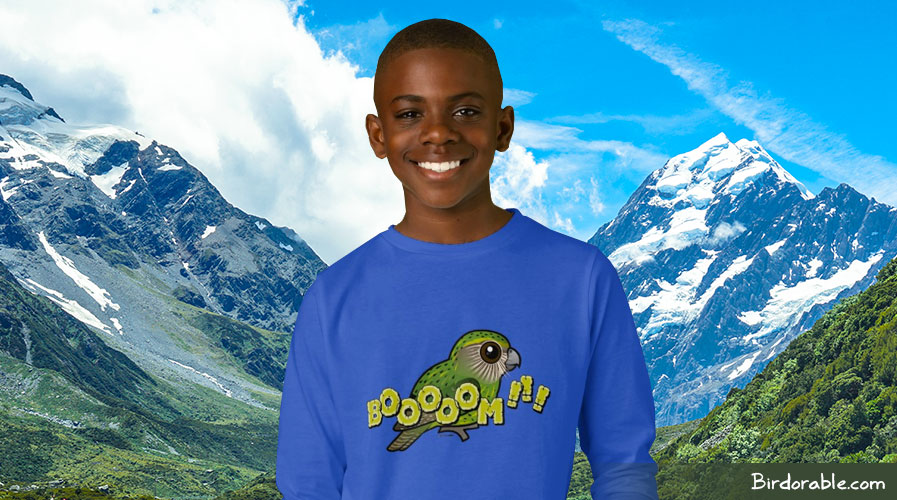 This week's featured t-shirt design is our Birdorable Kakapo in BOOOOOM!!!Â which is shown here on a Kids' Basic Long Sleeve T-shirt from Zazzle. The model shown above is 4'7" and is wearing a small.

The critically endangered Kakapo parrot (or Owl Parrot) of New Zealand is the only flightless species of bird to useÂ a lek breeding system for mating. During part of the lekking process, males compete for females by displaying and making a "booming" sound. Boom! Males position themselves kilometers apart to signal to potential mates.

This fun and original Birdorable design is inspired by the booms of the lekking Kakapo. Pick this up for the Kakapo lover on your list! Only true Kakapo fans will "get" this unique and cute cartoon design.