We're celebrating cranes on the Birdorable blog this week! Today we'd like to share a bird term that relates to cranes and other birds. Let's learn about what it means to be precocial!

The term precocial comes from the Latin praecocia, which refers to "places where fruits ripen early." A precocial species is one in which the newly hatched or born young are relatively mature. In birds, this means the baby is usually covered in downy feathers and is able to walk and even feed itself within a short time of hatching. This adaptation is found in most ground-nesting birds as a strategy to evade predators when the nest offers little shelter.

Cranes have precocial young, as do many other birds, including ducks and geese, chickens, and rails. Malleefowl chicks can even already fly within a day of hatching. There are some mammals born precocial, like the Hartebeest, whose calves can stand and walk within hours of being born.

On the other end of the development spectrum are altricial babies. In birds, this usually means at the time of hatching the chick is naked (without feathers), has its eyes shut, and is completely helpless and dependent on its parents for care all of its needs.

We're celebrating gulls on the blog this week! Today we'd like to share a bird term that relates to some species of gulls. Let's find out about kleptoparasitism!

Kleptoparasitism is just what it sounds like - parasitism by theft (klepto-). It basically refers to one animal stealing food from another. Before we go on, it should be made clear that gulls are not the only species that engage in this behavior. They aren't even the only birds that do so.

Why would one animal steal food from another? In some cases, the thief takes prey items that it would not be able to capture on its own. Sometimes the kleptoparasite steals food opportunistically, or to save the time and effort of obtaining prey. Kleptoparasitism can also refer to the theft of non-food items, like when Chinstrap Penguins steal nest material from other penguins to use in their own nest.

Birds in the seabird family Skua are known for their kleptoparasitic behavior. Some species of skua obtain a significant percentage of their food using this method, stealing prey caught by other seabirds.

Frigatebirds are known for this behavior as well, giving them the appropriate nickname "pirate of the sea".

Gulls can be both perpetrators and victims of kleptoparasitism. Heermann's Gulls and Laughing Gulls are known to steal fish from Brown Pelicans, snatching anything that escapes from the pelican's bill as it surfaces from a hunt. Gulls may chase others of their own species in order to steal freshly caught prey or found food items.

Chasing down deep diving fish hunters is a way for non-diving gulls to obtain food not otherwise available.

Gulls have also been known to steal food from humans! Has this ever happened to you?

The crop is a part of an animal's anatomy connected to the digestive system. It is used to store food before digestion. It is common in birds but also found in some species of snails and earthworms, and was present in some dinosaur species.

In birds, the crop is an expandable pouch found at the throat and often visible externally, especially when full of food. Not all species of bird have a crop. In pigeons and doves it is used to store food but also to produce a substance known as crop milk to feed their young.

Scavenging species like vultures and condors will often feed until they are completely full, and then fill their crop for later digestion. The crop gives the birds a chance to store food for later digestion which is advantageous when it is unknown when the bird will be able to feed again.

Other raptor species, like hawks, eagles, and ospreys, have a crop, but owls do not.

Birds that regurgitate food to their young use the crop to soften the food items before giving it to their chicks. 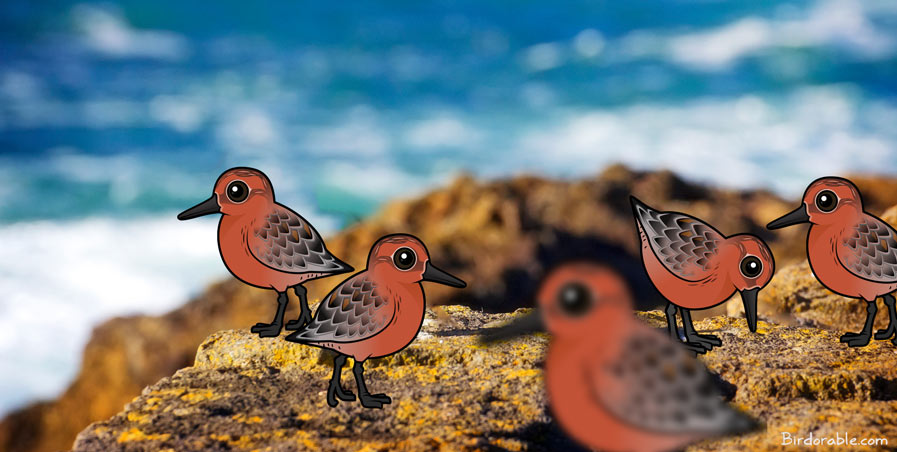 Brood parasites are birds that rely on other birds, often of a different species, to raise their young. Brood parasitism occurs in organisms other than birds, including fish and insects, but we'll focus on a few well-known bird examples here.

This type of breeding strategy allows biological parents to avoid the stress and time involved in raising young. 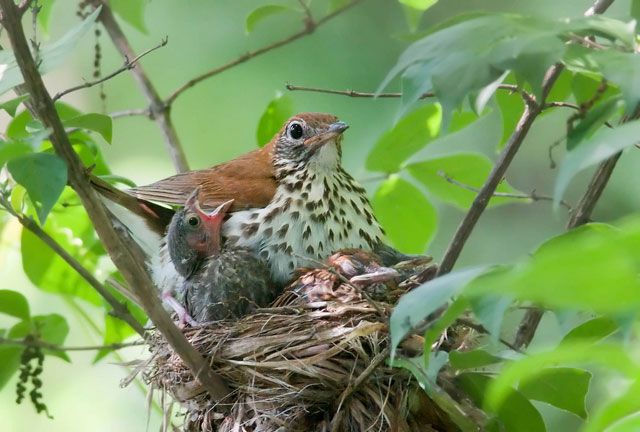 The strategy often involves laying eggs in several different nests in order to maximize the chances of young being raised successfully to fledge. The parasite bird also often removes an egg from the host parent to reduce discovery and improve their own offspring's chances of survival. Brood parasite birds generally have a shorter incubation period (with incubation actually starting internally within the biological mother bird) which also gives their offspring a head start over its adopted nest mates. 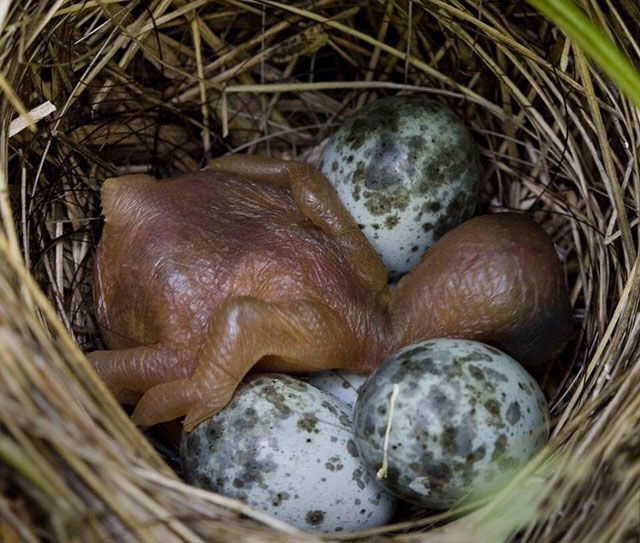 Common Cuckoo chick in host nest by Per Harald Olsen (CC BY 2.0)

A big risk with this strategy is discovery of intruder eggs. Some host species have learned to recognize intruder eggs in their nest, which may lead to total abandonment of the nest. Sometimes the discovery is made after hatching, and the parasitic chick is expelled from the nest. Another risk is using a host with a diet unsuitable for the growing chick. American Goldfinches are vegetarian; Brown-headed Cowbirds have an omnivorous diet and will not survive to fledge from finch parents.

Cowbirds and cuckoos are probably the most well-known species of brood parasites in the bird world.

The Brown-headed Cowbird is widespread across North America. This species has at least 221 known host species, from hummingbirds to birds of prey. 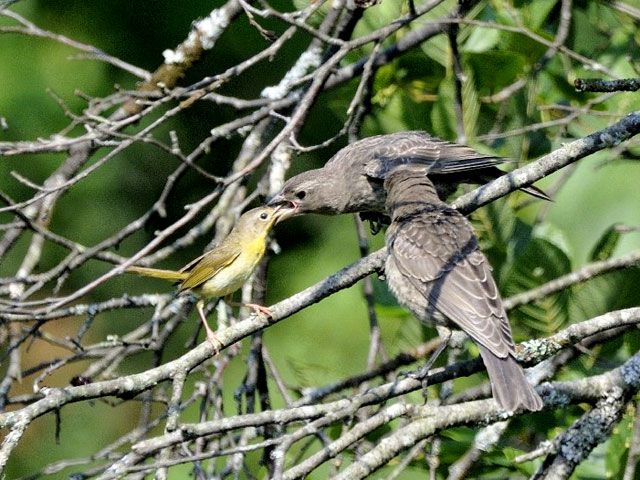 The Common Cuckoo of the Old World has wide distribution across Europe, Asia, and Africa. It takes a female cuckoo just 10 seconds to remove one egg and lay her own in a host's nest. Common Cuckoos have been recorded using over 100 host species. They are generally much larger than their hosts and the quickly-growing chick typically will remove all of the other eggs from the nest itself. 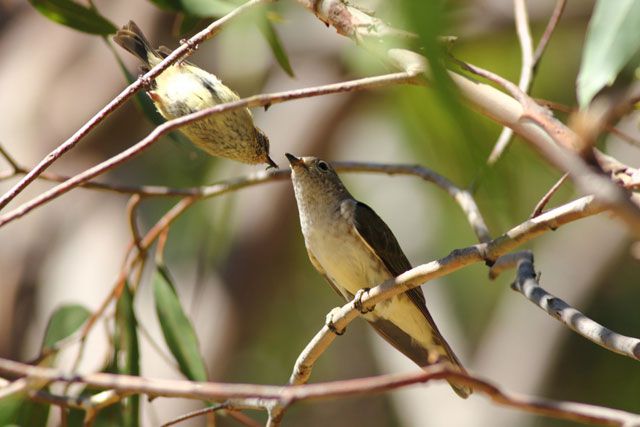 Have you ever seen a Brown-headed Cowbird, Common Cuckoo, or other brood parasite being fed by a host parent?