Today we introduce a rare species of stork: Storm’s Stork.

Storm’s Stork is a species found in Indonesia, Malaysia, and Thailand. They live in tropical forest habitat, where they feed on fish, frogs, and other aquatic prey. Unfortunately this species is considered to be the most endangered stork on the earth. They face habitat loss due to deforestation across their range.

Storm's Storks are named after a German explorer and zoological collector named Theodor "Hugo" Storm. Captain Storm was under contract with the natural history museum in Luebeck Germany to collect wild animals and specimens. The species was first described for western science by the German ornithologist August Wilhelm Heinrich Blasius.

Tomorrow’s new species is a New World songbird named for the color of its eyes. If we tell you they are neither Dark nor Red, you should be able to guess! Do you know the bird?

Jabiru have an all-white plumage. The head and neck are black and featherless. Another distinguishing feature is a red pouch at the base of the neck. Males and females look alike, though males may be up to 25% larger than females.

Jabiru are found in wetland habitat across parts of Central and South America. They feed on a variety of prey items, including fish, mollusks, and amphibians, generally foraged in shallow water.

Tomorrow's new bird is a member of the puffin family, named for a plumage feature that occurs during part of the year. Do you know this bird?

There are 19 species of stork in the world. These birds are generally heavy and tall, with long, thick bills.

The Wood Stork is one of three New World species of stork (the others are the Maguari Stork and the Jabiru). The range of the Wood Stork extends the furthest north of these three species. Here are some interesting facts about this unique species.

Wood Storks frequently feed in and around water, where they find prey items like fish, frogs, and even small alligators. They will also eat insects, crabs, and other small animals. Wood Storks find food by feeling around with their bill in shallow water. They may use their feet to stir up potenial prey as they slowly move through the water.

In the wild, it is believed that Wood Storks reach an average age of 11-18 years. From banding records, we know that the oldest wild bird lived at least 22 years and 4 months. The oldest captive Wood Stork lived to be just over 27 years of age.

The Wood Stork has a large natural range, covering much of South America, coastal Central America, and extreme southern parts of North America. The international IUCN considers the Wood Stork's population threats to be of Least Concern. In the United States, however, loss and degradation of habitat cause its status to be considered Threatened.

The Wood Stork superficially resembles an adult White Ibis and was formerly known as the Wood Ibis. This iconic bird has some interesting local nicknames, including Preacher, Ironhead, and Flinthead.

No, you're thinking of White Storks.

The Wood Stork was added to Birdorable on Feburary 22, 2017. 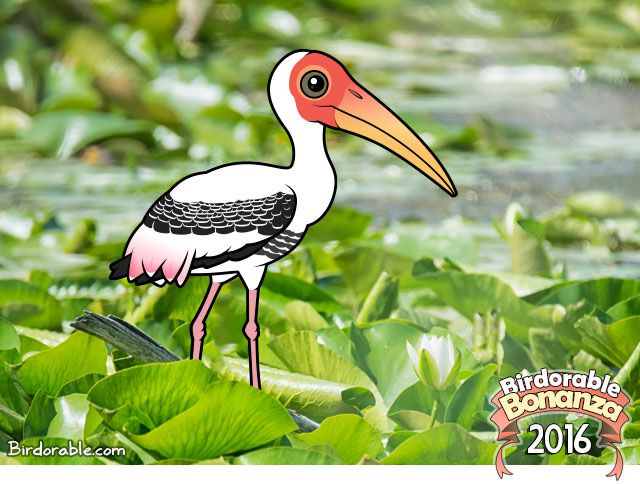 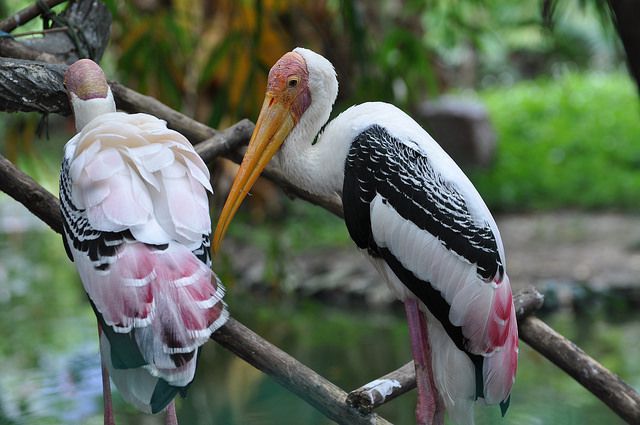 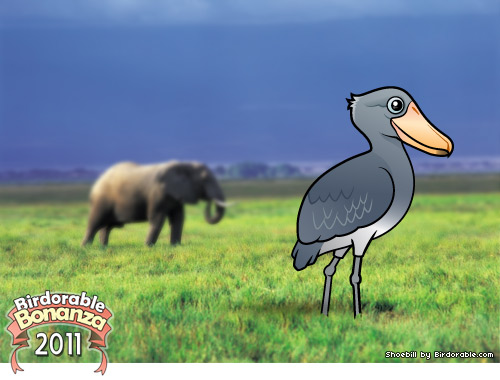 For 19 days we're adding a new Birdorable bird every day as part of our Birdorable Bonanza 2011. We're counting up to revealing our 350th species! Today's bird is the Shoebill. 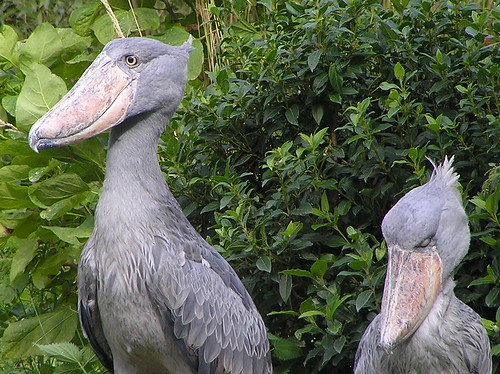 The Shoebill is a remarkable-looking bird with an amazingly huge shoe-shaped bill. These large birds measure up to 59 inches (150 cm) tall and their bills average 12 inches (30 cm) in length, giving it the largest bill of all bird species! The edges of this large bill are very sharp, allowing the Shoebill to cut up its food before swallowing it. They feed mainly on aquatic animals like baby crocodiles and fish. Shoebills live in parts of east Africa, with most individuals living in the Sudan, and are considered vulnerable, mainly due to habitat loss. 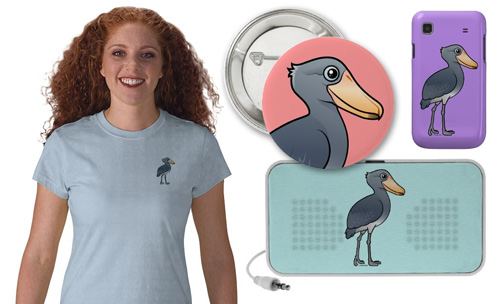 Tomorrow's bird is the largest 'true bird of prey' in the world. It breeds in high mountains and large forests across southern Europe and Asia. Can you guess what it will be?