This week, we're celebrating the gulls of the world! Join us as we highlight these social and intelligent birds. Today we're talking about how some gulls got their common names.

Of the approximately 55 recognized species of gull in the world, at least 12 of them take their common name from an historical figure. So just what does it take for a person to have a gull named after him?

Audouin's Gull is found around the Mediterranean and northwestern Africa. The species was named for the French naturalist Jean Victoire Audouin. Besides birds, Audouin also studied insects, reptiles, and mollusks. In addition to the gull, he had a fungus, Microsporum audouinii, named after him.

Belcher's Gull, also known as the Band-tailed Gull, is found on the Pacific side of South America. This species was named for the British naval officer and explorer Admiral Sir Edward Belcher. The Admiral traveled to and surveyed the habitat of his future namesake gull early in his career. 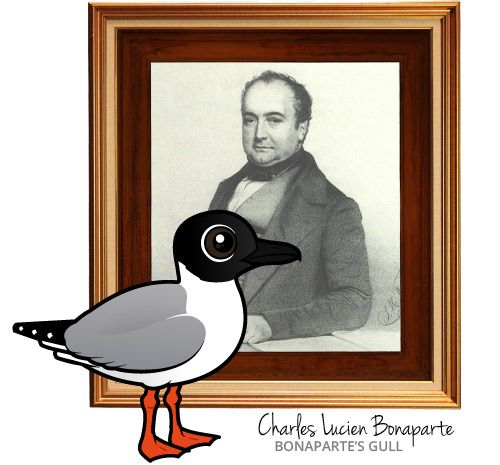 Bonaparte's Gull is a small species of gull found across parts of North America. The gull was named for the French biologist and ornithologist Charles Lucien Jules Laurent Bonaparte. The scientist was the nephew of Emperor Napoleon. On his voyage to the United States in the 1820s, he discovered the first specimen of what would come to be called Wilson's Storm Petrel. 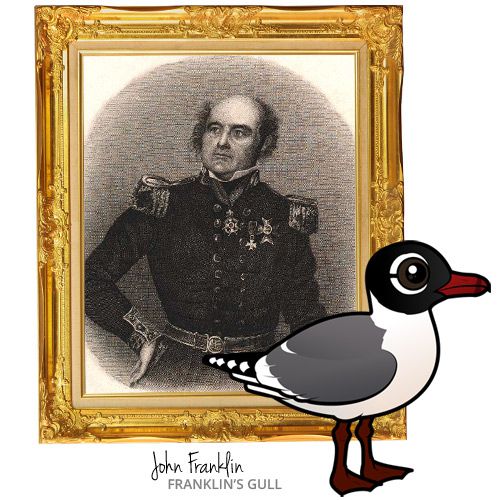 Franklin's Gull is a small "black-headed" gull that breeds across parts of North America and winters in the Caribbean and South America. It was named for the British Arctic explorer Sir John Franklin. The first specimen of the Franklin's Gull was collected on his 1823 expedition to the Arctic.

Hartlaub's Gull, also known as the King Gull, is found along the Atlantic coast of southern Africa. The bird was named for the German physician and ornithologist Karel Johnan Gustav Hartlaub. Hartlaub's Bustard and Hartlaub's Duck are also named for this German scientist.

Heermann's Gull is found on the Pacific coast of North America. This striking species was named after the American explorer and naturalist Adolphus Lewis Heermann. During a three-year expedition to the west coast of North America in the 1840s, Heermann collected over 1200 bird study skins.

Heuglin's Gull is a migratory species that breeds across tundra in Russia and elsewhere and winters in Southwest Asia, India, and Africa. The gull was named for German explorer and ornithologist Theodor von Heuglin. Heuglin's Wheatear is also named for the German adventurer.

Kumlien's Gull is a subspecies of the Thayer's Gull. The name comes from Swedish-American ornithologist, naturalist, and taxidermist Thure Kumlien. Kumlien settled in Milwaukee after moving to the United States and made significant contributions to the knowledge of Wisconsin's natural history. Kumlien was also a known authority on birds' nests and an early member of the American Ornithologits's Union.

Nelson's Gull isn't a species, but the result of the hybridization between a Herring Gull and a Glaucous Gull. The informal name given to this offspring was named for the American naturalist Edward William Nelson, who was the first to describe the bird.

Olrog's Gull is found along the Atlantic coast in parts of South America. This gull was named for the Swedish-Argentine biologist Claes C. Olrog, who also has his name on the Olrog's Cinclodes (a type of songbird), Olrog's Chaco Mouse, and Olrog's Four-eyed Opossum.

Pallas's Gull, also known as the Great Black-headed Gull, is a large species that breeds in parts of Russia and Mongolia. The species was named for the German zoologist and botanist Peter Simon Pallas. He described many species for science and has several others named after him, including Pallas's Cat, Pallas's Cormorant, and Pallas's Rosefinch. 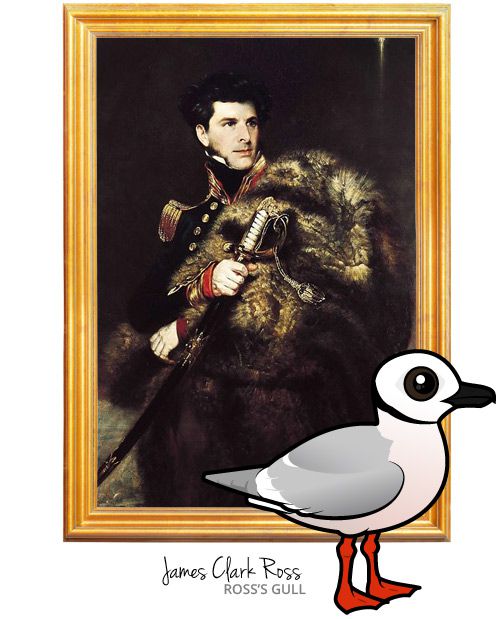 Ross's Gull is a small species that breeds in the high Arctic and Siberia. The gull was named for the British naval officer and explorer James Clark Ross. The Ross Seal, a moon crater, and the James Ross Strait are just a few of the other honorary names given in tribute of James Clark Ross. 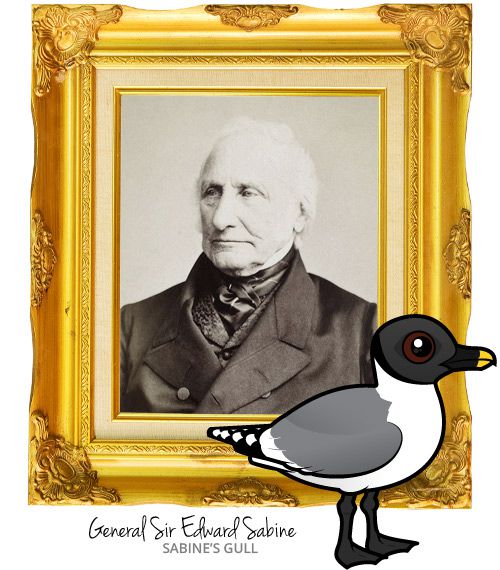 Sabine's Gull is a small species that breeds in the Arctic. It is also called the Fork-tailed Gull or the Xeme. The species was named for the Irish scientist Sir Edward Sabine. Sabine had a wide range of interests and is known for his research on the magnetic field of the Earth as well as his study of Greenland's birds. The Sabine's Puffback, a songbird, and the Sabine's Spinetail, a swift, are both also named for the scientist.

Saunders's Gull, also known as the Chinese Black-headed Gull, is an Asian species of gull. The bird was named for the British ornithologist Howard Saunders. The Saunders's Tern is also named after the scientist. Before developing a keen interest in gulls and terns, Saunders studied the birds of Spain.

Thayer's Gull is a North American species. It was named for the amateur ornothologist John Eliot Thayer. Thayer brought early attention to the problems native species suffer when non-native predators are introduced. Thayer's Gull was first collected during an expedition to Alaska in 1913.

City Bird: Rauma's Great Black-backed Gull
Many countries have an official national bird. For example, the national bird of Israel is the Hoopoe, and ... Read more
Previous Posts