A chimney that served as a roosting spot for Chimney Swifts for almost 50 years may reveal clues to the decline of the species. 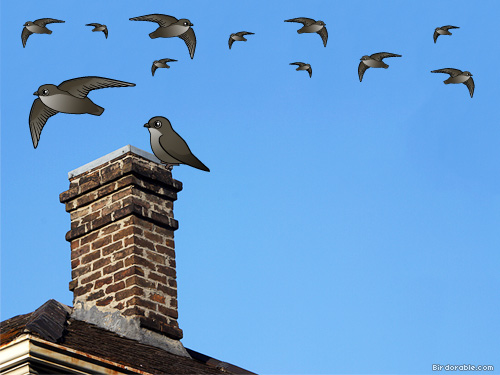 Last month, headlines like "Clues to Species Decline Buried in Pile of Bird Excrement" and "Clues Found In Huge Pile Of Bird Poop" were good for a chuckle, but the data gathered by going through layers of swift guano has produced interesting information. By studying the droppings, scientists could determine what food items the swifts were eating. Prior to the widespread use of the pesticide DDT, the Chimney Swifts were dining primarily on beetles. DDT caused a huge decline in beetle populations, leading the swifts to hunt and eat different insects that didn't provide the same nutrition as the beetles. Chimney Swift populations have been declining, with a major contributing factor thought to be loss of habitat. This study implies that changes in diet may also have significant impact. You can read more about this study here: Historical pesticide applications coincided with an altered diet of aerially foraging insectivorous chimney swifts