Today’s new Birdorable is a small type of songbird found in Australia: the Rose Robin!

Rose Robins live in wet forest habitat in southeastern Australia. They feed on a variety of insects, beetles, and spiders. They are named for the pretty rose-pink breast on adult male birds. In addition to the flashy rose, males are dark grey above and white below. Females are dark above and light below as well but overall a more mousey-brown color.

Rose Robins are part of a family of Australian songbirds related to fairywrens and honeyeaters. They are not closely related to American Robins (thrushes) or European Robins (flycatchers).

Tomorrow we’ll add a New World owl with a very distinct look. These strictly nocturnal birds appear in two color morphs, both of which have crests extending from their white “eyebrows”. Can you guess which owl is joining Birdorable tomorrow?

Today’s new species is the Fieldfare, a large species of thrush in the same family as the American Robin. They resemble their Yankee cousins in build and size, and in the way they hunt for worms in the soil.

Fieldfares are Old World birds, and highly migratory. They breed across forests in the north of Europe and Asia. Their winter range extends across much of Europe, down into northern Africa and parts of the Middle East.

Fieldfares can be recognized by their grey heads, ruddy brown upperparts, and spotted fronts. They also have distinctive yellow bills with a black tip.

Tomorrow’s new species is a small macaw named for the color of one of its body parts. These gregarious birds live in forest habitat in parts of South America and have a different name when referring to the species in aviculture. Can you guess the bird? 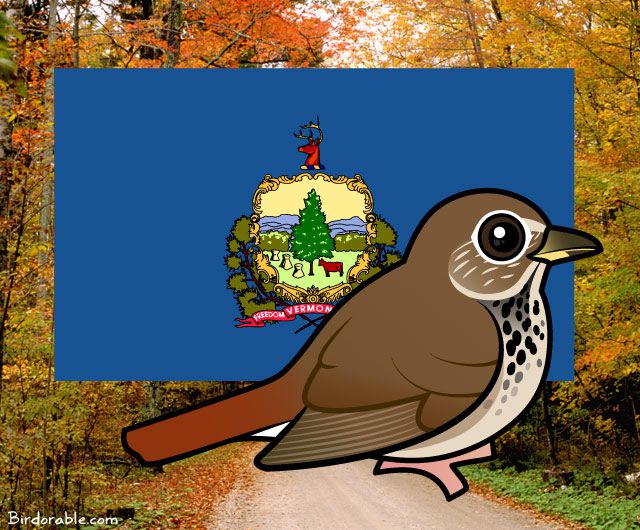 Today we have added a new species to Birdorable: the Wood Thrush. 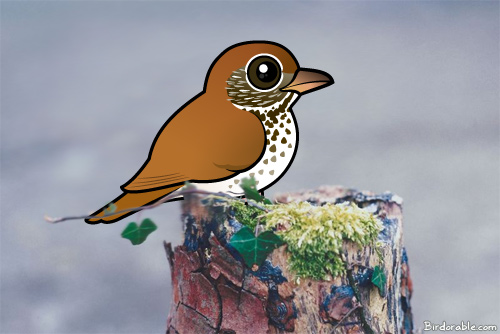 If you can't get enough of this amazing songster, be sure to check out our selection of apparel and gifts featuring our cute cartoon Wood Thrush!

If you think our Birdorable birds are cute as adults, what about when they are babies? Below are some baby photos (Creative Commons images shared via Flickr) of the Eastern Bluebird. Eastern Bluebirds are small thrushes that live across much of eastern North America. They are cavity nesters and will use nest boxes. Incubation lasts about two weeks, starting after the last egg is laid. Typical clutch size is 3 to 7 eggs. Fledging occurs about 18 days after hatching. 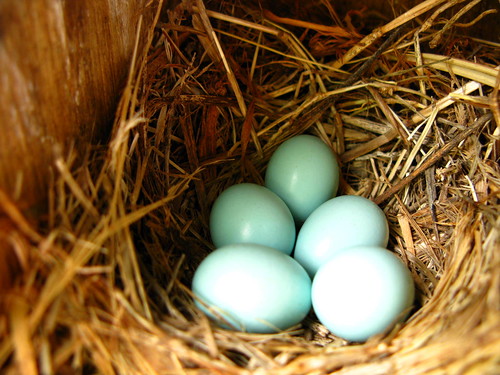 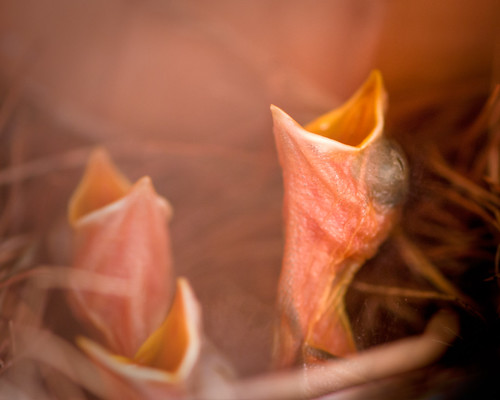 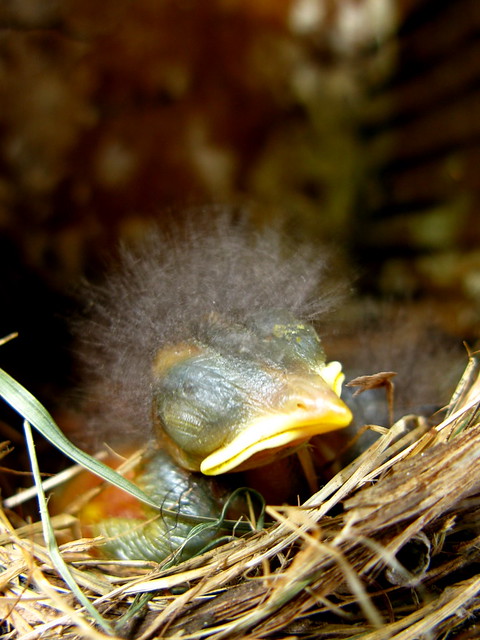 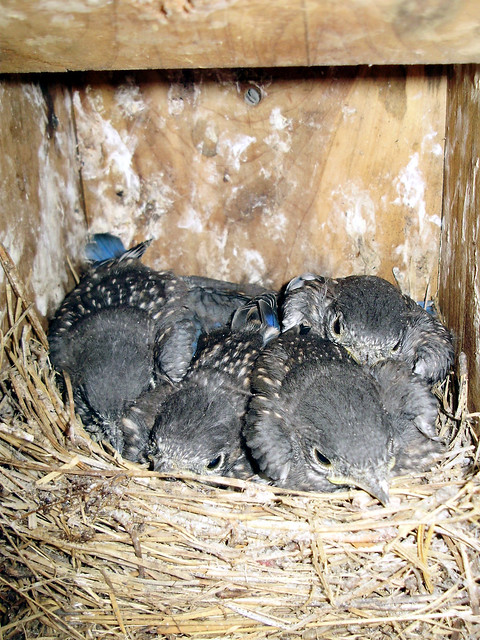 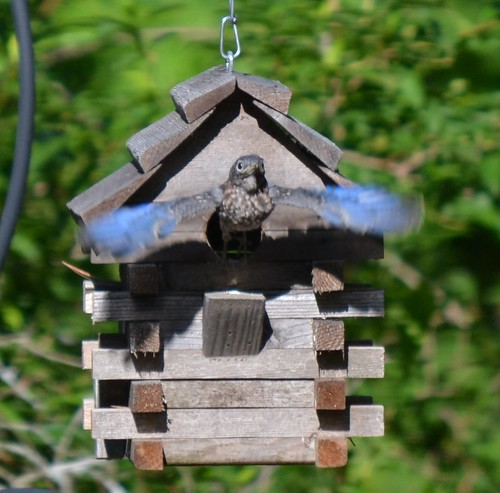 The Second Eastern Bluebird to leave the nest box. by trista.rada 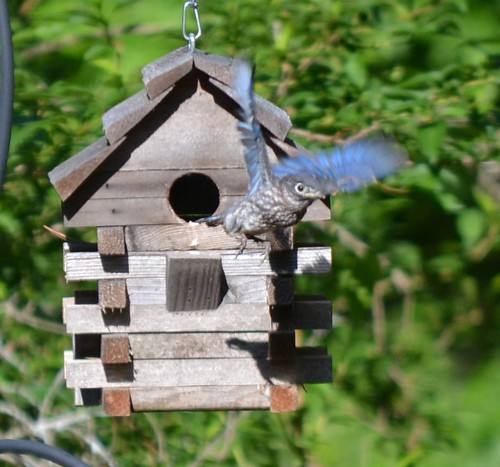 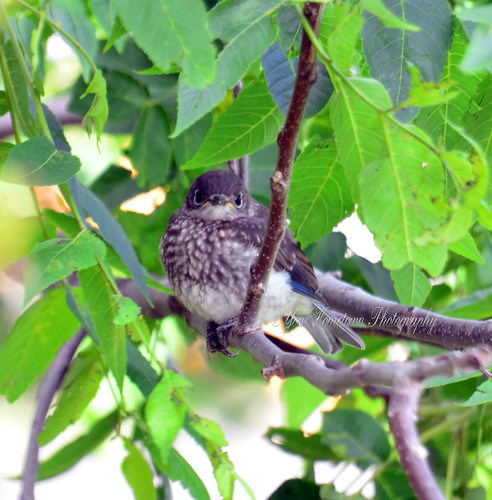 Pretty cute, right? Be sure to check out our Birdorable Eastern Bluebird t-shirts and gifts!

If you think our Birdorable birds are cute as adults, what about when they are babies? Below are some baby photos (shared via Flickr) of the Blackbird. Common Blackbirds live throughout Europe and parts of north Africa and east Asia. They are thrushes - related to the American Robin. Female Blackbirds construct cup-shaped nests in evergreens or other similar vegetation. Three to five eggs are laid and hatching occurs after about 13 days of incubation. The baby birds fledge at approximately 14 days after hatching. 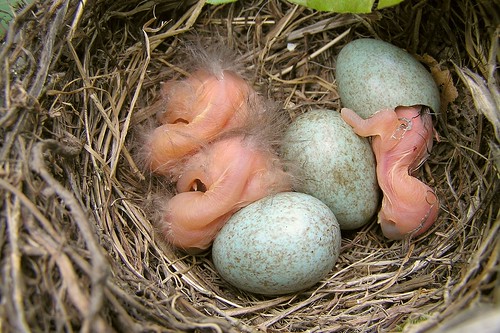 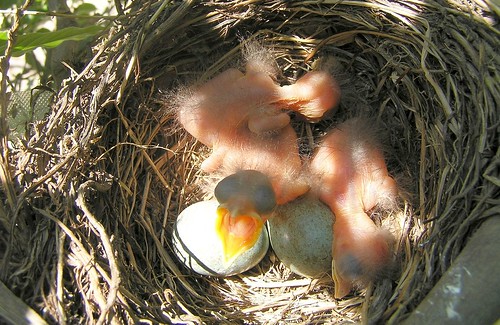 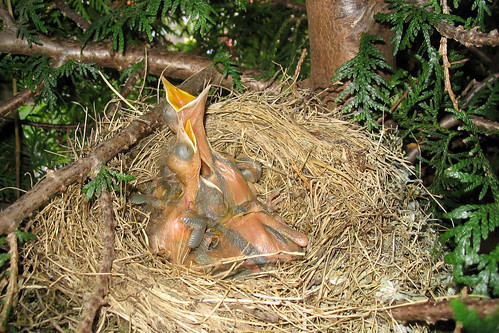 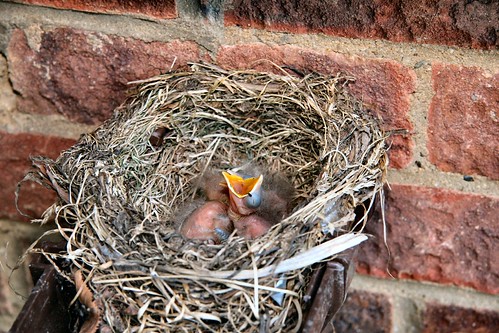 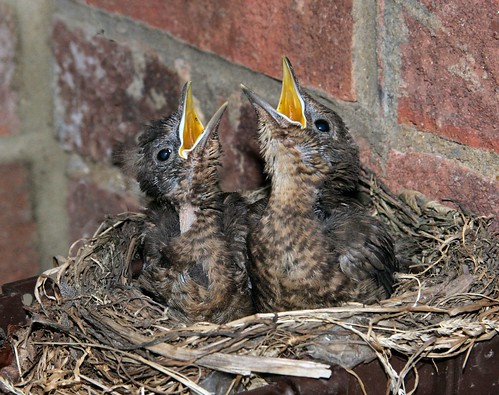 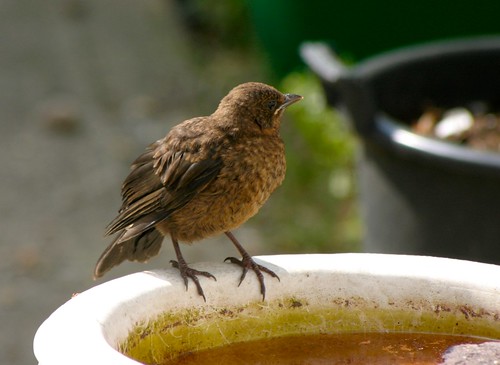 Pretty cute, right? Be sure to check out our Birdorable Blackbird t-shirts and gifts!