Do you know what all of the birds in this picture have in common? 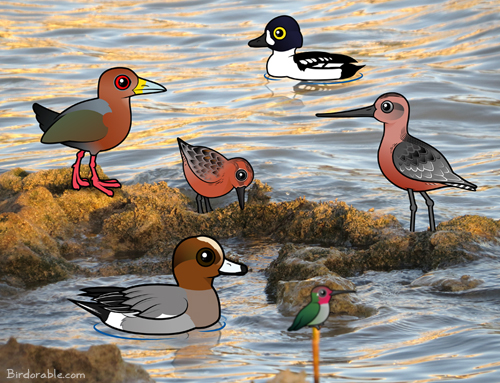 You're not likely to find them all in the same spot, that's for sure! But these species were all seen in North America this year by Neil Hayward, a birder doing a North American Big Year. As of this afternoon, Hayward has seen a total 744 species in 2013, with 3 additional "provisional" species. That puts him in a very good position to break the record set by Sandy Komito, who saw 745 (+3 "provisional") species in 1998.

Komito had serious competition from two other birders during that big year. The adventures of all three became the basis for a popular book and the big screen film "The Big Year" starring Steve Martin, Owen Wilson, and Jack Black. Hayward is maintaining a very entertaining blog of his year at Accidental Big Year 2013.

Have a look -- the next two weeks will probably see him zipping from state to state and he could very well blow the record out of the water!

Jays and Kestrels wrote:
Amazing! I wish to do a big year. :)

Spurwing Plover wrote:
The Bar Tailed Godwit spends is Summers with the Ptarmigan and Winters with the Kiwis